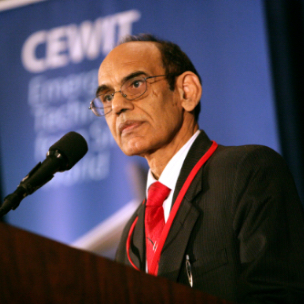 Dr. Satya Sharma is the President and CEO of Zortag, Inc. He is also the Executive Director of the Center of Excellence in Wireless and Information Technology (CEWIT) and a Professor at Stony Brook University. Dr. Sharma was previously Senior Vice President at Symbol Technologies (now part of Motorola) from 1995 to 2003, overseeing various divisions of the company including World-Wide Operations, Mobile Computing & Wireless Engineering, and Quality & Process Improvements. During Dr. Sharmas tenure at Symbol, the revenue increased from $450 Million to more than $1.6 Billion. While leading Symbols Mobile Computing & Wireless Engineering, the company won the National Medal of Technology in 2000, the highest technology award given by the US Government. Symbol was only the third electronics company to win this coveted award in addition to IBM and Bell Labs. He also led Symbol to win the Shingo Prize for Excellence in Manufacturing in 2003 and established Symbol’s software center in India and its manufacturing facility in Mexico and oversaw its operations in US, Mexico, Singapore, Japan, China and India.

Prior to his tenure at Symbol, he was Director at Bell Labs and at AT&T Power Systems. He led Lucent Technologies to win the Deming Prize, considered the Noble Prize in Management in 1994, making it the first and still the only American manufacturing company to have this honor. Dr. Sharma also led Lucent to win the Shingo Prize for Excellence in Manufacturing in 1992. Under Dr. Sharmas leadership, Lucent also won the US Senate Productivity Award and the Environmental Excellence Award from US President George Bush.

In 2009-2010, Dr. Sharma was advisor to the Chairman and CEO of Bilcare Technologies headquartered in India and with operations in Singapore, USA and Europe. Bilcare Technologies is a leading enterprise engaged in preventing counterfeiting worldwide. He was also the Chief Operating Officer of RF Technologies, Milwaukee, Wisconsin in 2006 and has been a consultant to a dozen startup and small and medium size companies worldwide.

Dr. Sharma has written more than 70 technical publications, has received several patents and is an expert in a wide variety of disciplines including wireless and mobile computing, quality management, materials science, manufacturing, and information technology. He holds a Ph.D. degree in mechanical engineering from the University of Pennsylvania and an MBA degree from the Ohio State University.